Phytocannabinoids are cannabinoids produced within plants, 113 of which we currently know. Plants that produce cannabinoids include Kava, Rosemary, Liverwort, Electric Daisy, Echinacea, Cacao, Helichrysum, Pepper Trees, Black Truffles, and of course, Cannabis. There is even a strain of yeast (Pichia pastoris) with the unique ability to synthesize THCA. Endocannabinoids and phytocannabinoids aren’t necessarily different on a structural level. They both activate the body’s ECS by binding to cannabinoid receptors. Endocannabinoids activate a homeostatic effect, bringing the body to a balanced state of health. They are produced by our cells in an “on-demand” fashion.

Why does the plant produce cannabinoids?

The cannabinoid count sits somewhere between 85 and 110, each a unique molecule with its own chemical structure, and those numbers are sure to increase with more research. These cannabinoids work with each other and our bodies in a complex web that employs the human endocannabinoid system to provide relief from pain, nausea, anxiety, inflammation, and a growing list of other ailments.

As the plant grows there are two precursor cannabinoids which are form and cannabinoid synthesis starts with, CBGA and CBGVA.

As the flower forms, trichomes which under a microscope have the form of a mushroom, begin to form. These trichomes contain the many cannabinoids and terpenes. Whilst the plant is in its natural state, the cannabinoids are in an acid form.

These acids are non-intoxicating, you cannot get the high which is usually associated with THC.

The cannabis plant can be consumed raw and the acid form of cannabinoids have great medical benefits. Many people consume flower in salads or juice them along with the leaves which contain omega fats and vitamins.

Decarboxylation means heat. When the cannabinoids are heated (whether that is via drying, extraction, vaping or smoking) the cannabinoids convert into a neutral state, this is when THC becomes "active" and we feel the effects of the "high".

CBD is certainly a mood-altering substance. It has been shown to have moderating effects on anxiety, psychosis, depression, pain, appetite, memory, seizures and other brain activity. It works in tandem with THC and other cannabinoids that act on the central nervous system. CBD does not result in euphoria or intoxication, but to say that it is "non-psychoactive" is technically wrong and misleading to the patient or consumer.

THC over time and through the process of oxidation degrades and forms CBN, this can also happen to exposure to UV light. 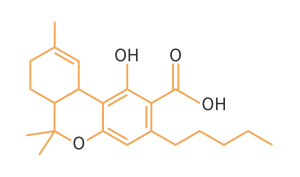 Along with CBDA (The A stands for acid in both), THCA is one of the most prevalent cannabinoids present, at least until the molecules are decarboxylated (the process is called that because it causes the molecules to lose their carboxylic acid) through heat, light, or time. Once they’ve lost their carboxylic acid, CBDA and THCA and become CBD and THC, respectively. Unlike THC, THCA is non-psychoactive. It shows promise in reducing nausea, seizures, muscle spasms, and fighting tumor cells, and has been shown to have anti-inflammatory and neuroprotective properties. 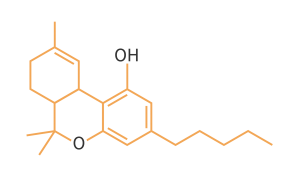 Once THCA has been decarboxylated, the remaining molecule is THC. There are two varieties, the most common called Delta-9 THC. This is the main psychoactive component in cannabis, and it acts on both the CB1 and CB2 receptors. THC has also been shown to reduce pain perception, nausea, and vomiting, aid sleep, and help suppress muscle spasms. Research suggests it may also be neuroprotective and inhibit cancer cell growth. Delta-8 THC has a very similar structure, but is present at a much lower concentration. It is also considered psychoactive, and binds to the CB1 receptors, primarily in the central nervous system. It is considered to have antiemetic (meaning reducing nausea and vomiting), appetite-stimulating, neuroprotective, and particularly analgesic (pain relief) properties. 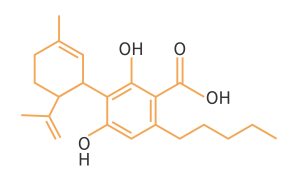 The acidic precursor to CBD, CBDA is found in the raw plant, before it has been exposed to heat, sunlight, or time. CBDA has been demonstrated to reduce nausea and inflammation, and there is evidence it may inhibit some cancer tumor growth. 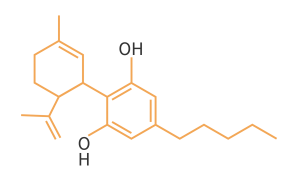 Once CBDA has been decarboxylated, the molecules are transformed into CBD. CBD is the most well-known of the cannabinoids, and works with our endocannabinoid system by reacting with CB2, the same receptors that respond to our endocannabinoid anandamide. Research on CBD has shown it promotes bone growth, reduces blood sugar levels, reduces nausea, vomiting, anxiety, seizures and convulsions, is anti-inflammatory, anti-tumoral, and analgesic, and there is promising research on more fronts every day. 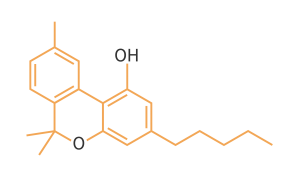 As THC is broken down, which happens when already harvested cannabis ages, it is converted in CBN. It has a high affinity for CB2 receptors over CB1, implying that it effects the immune system more than the brain. CBN is known to help with insomnia, pain relief, promotion of bone growth, muscle spasms, and to be an appetite stimulant. 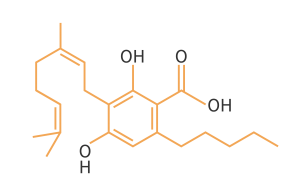 CBGA is found mostly in young plants, as it develops into THCA and CBDA as the plants mature. There is often very little left once the plants are harvested, and when it is exposed to light and air, the remaining CBGA converts to CBG. CBGA is considered to reduce inflammation and pain, and it has been shown to slow bacterial growth. 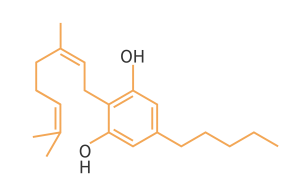 Once a plant is harvested, any CBGA that has not already developed into THCA or CBDA becomes CBG. CBG is not psychoactive, and has been shown to slow bacterial growth, promote bone growth, and has been used as a sleep aid, mood stabilizer, muscle relaxant, and blood pressure reducer. It has also been found to be antibiotic, antimicrobial, and anti-fungal. 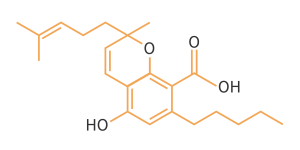 Often used to treat fungal infections and reduce inflammation, CBCA is the precursor to CBC, and is found mostly in immature cannabis plants. 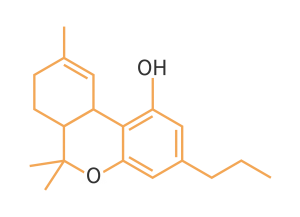 THCV is a psychoactive cannabinoid, and has been shown to suppress appetite, reduce panic attacks, seizures, and convulsions, regulate blood sugar levels, stimulate bone growth, and help with Alzheimer’s.  THCV is only about a fifth as psychoactive as THC, and can even mitigate some problems associated with it.

CBC is a non-psychoactive cannabinoid with clear evidence of health benefits. It has a long list of promising possible uses, including inhibiting tumor growth, pain relief, reducing inflammation, and promoting bone growth. It also has anti-epileptic, anti-bacterial, antifungal, and sedative properties. A 2010 study showed CBC to be most effective at anti-inflammation when taken alongside THC, another compelling argument for the Entourage Effect.